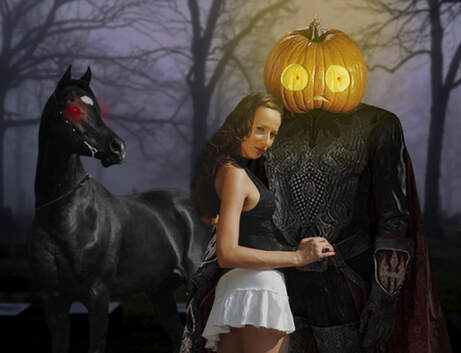 The Rotten Appal news team was able to sit down for an exclusive interview with The Headless Horseman to gain further insight into his quest this Halloween.

Can you tell us a little bit about your efforts to court a woman?

HH: It’s a struggle, it really is. Every Halloween I rise from my grave looking for someone to go out with and hopefully get a head from. The first part is easy! Who wouldn’t want to go out with a stud like me? Chicks really dig the horse, and they think I put a lot of effort into my costume, which is a definite win. It’s the head part where things come to a screeching halt.

Because of the headlessness thing, or . . .?

HH: Absolutely. I just don’t get it. With every single woman I have no trouble getting her back to my hotel room and putting the swagger on. I figure my grave isn’t as welcoming as the Holiday Inn. My personality is charming, my body is chiseled, and my member, of course, is always ready to go. Rigor mortis is a real thing, but people always seem to forget! Unfortunately, at the end of the night, I remain headless.

Have you considered approaching from a new angle or mixing up your strategy?

HH: Oh, all the time. It seems just about every year that I’m mixing up my strategy. I’ve picked up women from bars, outside theaters, restaurants, plays, and even mall bathrooms. Once we get back to my place, I’ve tried lighting candles, drinking champagne, buying and spreading rose petals, and playing romantic music. I’m always trying to set the mood, you know? I always think we’re about to get into foreplay, and then everything just… stops. She goes home, and I’m left cradling my gourds.

We’ve gotten reports that you ask these womens to give you a new head. Do you think that has anything to do with your problems?

HH: I’m actually beginning to think that that is the crux of the problem. I think these women believe that I’m taking advantage of them when I ask them for a head. I’m honestly not, I’d just rather see them through a pair of fresh eyes rather than this damn jack-o’-lantern that I have to carry everywhere. They always seem to ditch me shortly after I ask them for head. Sometimes they’ll say that I have to give them head first and it’s like lady–I don’t even have one to start with? How am I supposed to give it to you? And they seem to think that means I’m not respecting them.

Maybe you could ask for a new head earlier in the night?

HH: You know, I actually haven’t thought of that! Maybe if I was just upfront about wanting a head from women, I would actually be able to score with them because they’d know what they were getting into! That’s brilliant! Thanks, Rotten Appal news team.
​
No problem, it’s what we do. We hope that you’ll be able to cure your blue balls. No one wants to remain headless forever.